Kirby is supporting Focus Ireland with its bid to end homelessness by donating €10,500 to the charity as part of the company’s annual Christmas charity donation.  The donation will provide Focus Ireland with the support it needs to help more children, families and single people to have safe and secure homes this Christmas.

This is the third year in a row that Kirby has supported Focus Ireland; last year’s donation helped Focus Ireland to support over 350 families to secure a home and escape homelessness.

Jimmy Kirby, Kirby Group Managing Director, presented the donation to Focus Ireland on behalf of Kirby.  Speaking at the presentation, Jimmy Kirby said: “Seeing the positive and lasting impact which our contribution made to individuals and families over the last twelve months; we are happy to continue our support of Focus Ireland this year”.

Shockingly one family became homeless every 8 hours during October in the capital city.  The good news is, during the period January-September 2018, Focus Ireland managed to prevent 350 families from entering homelessness. We also now provide over 1,100 homes across the country. This would not be possible were it not for the backing of supporters, including the great staff and management at Kirby, continued Le Bon.

There are currently 9,724 people homeless in Ireland of which 3,725 of those are children.  So far this year, Focus Ireland has helped over 13,000 people who are homeless or at risk of homelessness.

Every year Kirby makes a significant contribution to a substantial number of charities. The donation to Focus Ireland is one of many charity donations which Kirby will make this Christmas.

Since its foundation in 1964, Kirby has embraced the spirit of enterprise in a socially responsible manner.  Each year, Kirby supports a significant number of charities and community initiatives.  Last year, Kirby was presented with a CSR: Best Contribution to the Community Award in recognition of its significant positive impact on the community socially, economically, environmentally and culturally. 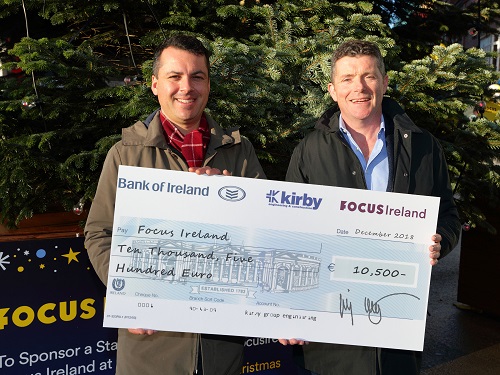